Hope From The Forgotten Woods 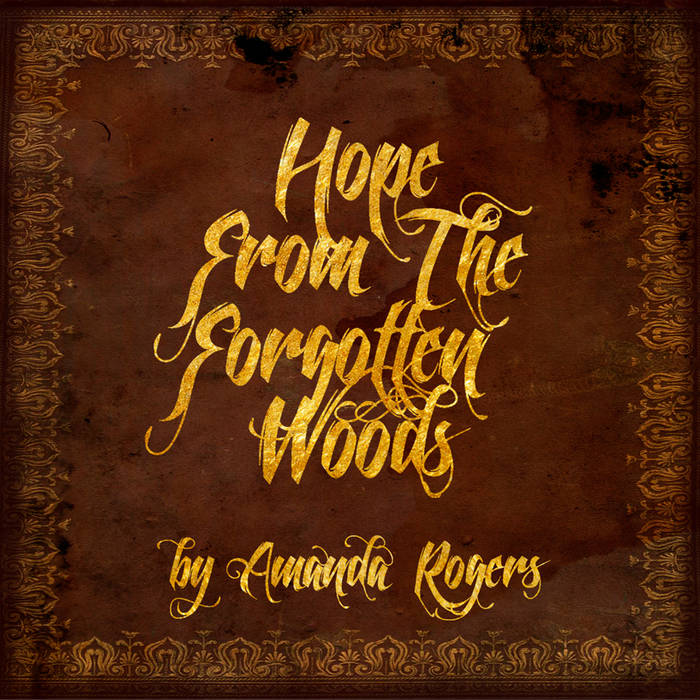 "To Hope is to fear", so goes an ancient chinese proverb, and like the yin and yang, and all things of light and goodness in need of darkness to be complete, this could not be more accurate when speaking of Hope From The Forgotten Woods, Amanda Rogers 7th Album release due out April 24th on Make My Day Records. Amanda's songs have always held a filmic quality to them like imagery and score moving along the plot to a silent film, so it comes as no surprise that she would eventually make a concept album, like the musical equivalent to a risque crime drama film of the 1930's. Hope From The Forgotten Woods is Ms. Rogers most intimate and revealing album to date, full of honest self-observation. Digging deep to the core of a single emotion felt by the tragedy and despair brought on by the cruelty of others and fully realizing the fantasy of the "what if", Amanda conceptually fulfills the urges of her true hearts' desire. Like Satisfying an itch, Ms. Rogers lets her mind slip to the dark side to explore a feeling so deeply that she was able to fabricate such circumstances of emotional truth that you could never believe it was partially rooted in pure fiction.
Hope… is a 16 track album that was conceived of and written 3 years ago, during which time Amanda explored other musical ventures, and while these songs sat and simmered in her heart and mind, the story began to unfold - revealing more to Ms. Rogers about herself than she ever expected. Amanda is always sure to let the creative process happen to her rather than to make it happen, and so once this story unravelled, she spent night and day alone in the studio and recorded every spark just as it flowed into her, creating a dark and intimate soundscape that supports the confessions of a would-be serial killer full of pain, passion, vengeance, and liberation.
Can you dream up an alternative ending to the story to help mend your broken soul and seek revenge on a wicked world without leaving the confines of your mind?
Well, yes, with songs like "Get Your Heart", and "Ms. X" , Amanda's Hope From The Forgotten Woods has done just that.

All Songs and Lyrics written by Amanda Rogers
Copyright 2012 Amanda Lynn Rogers / Amandas Piano Music (ASCAP)
www.amandaspiano.com / www.ditrecords.com / www.thepleasantsmusic.com / www.makemydayrecords.de
All Sounds Recorded, Engineered, and Produced by Amanda Rogers at Mt. Hollywood Studios, Belmont,VT
Mastered by Tom Waltz at Waltz Mastering in Watertown, MA
Amanda is a YAMAHA Performing Artist and uses their Digital Pianos and Synths in the studio and on the road.
All artwork, graphic design, and layout by Amanda Rogers
All My Life and Hope From The Forgotten Woods Lyric book Portraits taken by Stéphane Lord
Ms. X Self Portraits by Amanda Rogers - Back Cover Portrait and all other photos of Amanda - by Mike Matta.

"just may restore your faith in Singer-songwriters."

"Quiet and somber melodies with introspective lyrics and ethereal instrumentals create an exciting dynamic that Rogers excels at. One can see why she brings audiences to a still awareness and complete hush, as she dazzles the listeners who give her their full attention." ... more

Bandcamp Daily  your guide to the world of Bandcamp

Featured sounds from Fly Lo and Ahmed Idris, plus Mother Nature hops on to drop off new project